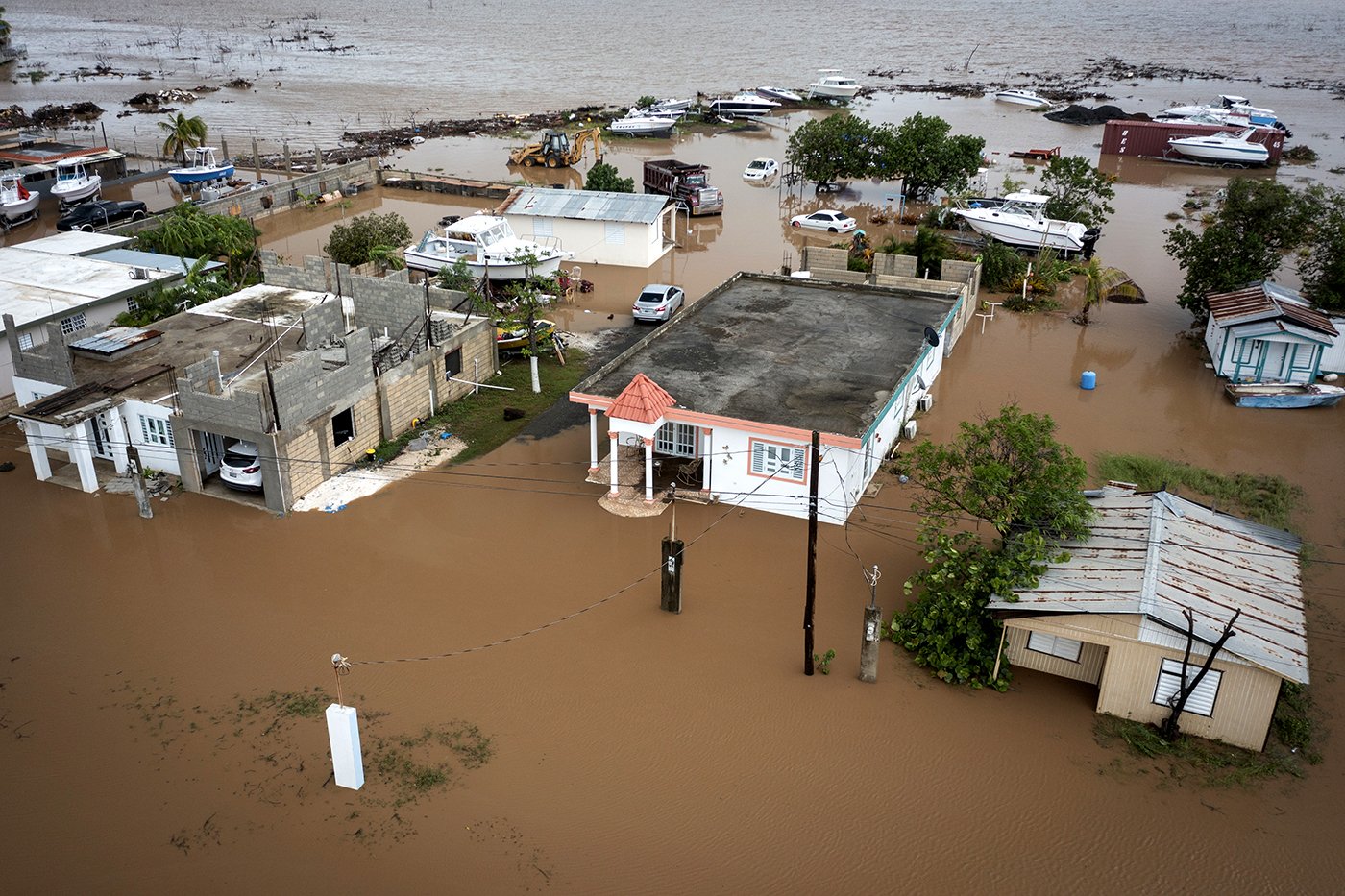 On September 18th, two days before the five-year anniversary of Hurricane Maria, the deadliest natural disaster to occur within the last century of U.S. history, Puerto Rico was struck by Hurricane Fiona.  Fiona swiftly destroyed the island’s electrical grid, leaving the entire population without power, making it the second blackout occurrence within the last six months.  According to the World Meteorological Organization, climate change is expected to continue to increase the proportion of major tropical cyclones worldwide, as well as the heavy rainfall typically associated with such events.  Having spent my childhood in Puerto Rico and having an acute awareness of science’s climate change warnings, hurricanes are an arguably inevitable occurrence at this point, which one might expect to anticipate in this otherwise Caribbean paradise.   What is not inevitable though, is the impact of disaster colonialism that enables environmental injustice in the wake of such ‘natural’ disasters.

The overarching whitewashing of Queen Elizabeth II’s legacy, made evident by public response to news of her passing on September 8th, highlights a concerning sense of widespread ambivalence towards whether colonization was even necessarily a ‘good’ or ‘bad’ thing.  To those who bear the brunt of colonialism’s generational impact, this seemingly complicit disregard for suffering may sadly come as no surprise.  The assumption that mother nature is indiscriminate in its devastation capacity, misses the inequities involved with aspects surrounding the human-controlled relief responses and preparation tactics.  The sheer devastation potential that looms with climate change’s threat, is not yet equally evident to all, as those who have systematically benefitted from power structures born out of colonialism are protected from the realities that more at-risk populations continue to pay the highest price in.  It is imperative that we center equity in approaching solutions for climate change disasters, as we endanger us all without this shared understanding.  We are not a healthy community unless we’re taking care of all in our community.

On September 19th, during active widespread crisis across the entire island of Puerto Rico, the majority of U.S. media outlets opted to spotlight Queen Elizabeth II’s funeral instead, effectively prioritizing ‘respect’ for a non-citizen figure-head with a dark legacy as one of the greatest representatives of colonialism and imperialism, over the importance of what should’ve logically been rapid humanitarian relief for millions of our own citizens.  Our economic and political structures have predominantly evolved around principles rooted in colonialism’s favor, with elements of said layers influence covertly hiding in our very psyche still.  The British monarchy (empire) continues to benefit from what they historically stole unjustly and have instead strategically focused public perception dominantly on romanticized narratives, which enables our societal norms to continually minimize colonialism’s deeply painful role in systematically disadvantaging affected populations.  Ignoring past atrocities does not erase them, but rather is the root of division that emboldens resentment through a lack of psychological safety that persists without a shared understanding of its negative impact.  It’s unreasonable to expect those who have been wronged through the erasure of their culture and economic autonomy to simply forget wrongdoings that remain clearly evident after generations of structural exploitation; without recognition and reconciliation we cannot build something better altogether, and therefore continue to stall our collective progress.  To paraphrase Edgar Villanueva in, ‘Decolonizing Wealth: indigenous wisdom to heal divides and restore balance,’ altruism is a principle that is generally revered based on the ethos of colonizers.  Through deeper analysis of the role colonialism played in cultivating valuation of such principles as altruism, altruism is still reflective of ‘othering,’ that is emblematic of the white-savior complex which leaves one group playing the role of ‘giver’ and the other of ‘taker.’  We do not consider groups who we already expect to make sacrifices for others (for example, mothers caring for children) altruistic, but rather reward that highly-regarded title only to the privileged whose sacrifice is not already subconsciously anticipated.  When comparing the philosophical principles of altruism, which is more aligned to a colonized perspective,  to that of reciprocity, which is more commonly aligned to indigenous populations in the U.S., we find the contrast between what is linear and what is cyclical.  What work in climate change solutions reiterates time and time again, is the necessity of sustainability, which is most closely aligned to cyclical thinking.  Reciprocity is based on our inherent interconnectivity and mutual dependence, something indigenous populations have overall always been far more acutely aware of and respectful of than the altruistic favoring weaved throughout the fibers of colonialism’s cloak.  Altruism, in the exploration of its principles within this context, suggests a gift must be without expectation of a return to truly be a gift (linear).  Reciprocity, however, acknowledges that we take care of each other because we are ever aware that throughout our lives we all will at one point or another play both roles of ‘giver’ and ‘taker,’ and are motivated to care for one another because we can trust that the same would be done for us (cyclical).  Indigenous populations generally have always held deep wisdom and respect towards nature overall; we would benefit from their lessons in valuing interconnectivity, instead of a sort of internalized hierarchy of righteousness, while searching for solutions to effectively tackle the looming climate crisis.

The United States seized control of Puerto Rico in 1898 via forced annexation from imperialism by the Spanish-American War, and yet to this day Puerto Ricans are forced to live under U.S. laws.  With essentially no control over their economy and no ability to vote for President or Congress, Puerto Ricans are effectively forced into second-class citizen status they vehemently oppose.  The poverty rate in Puerto Rico is 43.5% (poorer than the poorest U.S. state, Mississippi), which has forced many to emigrate throughout the decades.  The poverty rate in Puerto Rico emphasizes additional barriers to self-determination that exist when residents are forced to survive without adequate federal relief efforts after a natural disaster, as is evident by the roughly 200,000 individuals who had to evacuate the island after the mishandling of Hurricane Maria relief in 2017.   After leaving Puerto Ricans without power, water, or adequate shelter for months, the negligence in mishandling relief response after Hurricane Maria directly contributed to the preventable death of thousands of Puerto Ricans.  Puerto Rico’s underdevelopment and weakened infrastructure is a result of the U.S.’s linear extraction and exploitation of resources over the decades and ineffective colonial government, which leaves the island’s residents ever more at risk to the increasing severity of natural disasters brought on by climate change.  Puerto Rico is not alone in examples of such mishandling of climate catastrophe relief efforts as enabled by colonialism.  A myriad of colonized examples in history can be found and similarly contextualized, including recent examples with severe flooding in Pakistan.  Similar comparisons make it apparent that our current capitalistic responses to natural disasters are not modeling sustainable solutions.  Specific examples of such mishandling in Puerto Rico’s case demonstrate the layers of generational impact that colonization has made possible.  Despite the human death toll after hurricane Maria, Puerto Rico’s privatized utility system (PREPA) awarded $4.4 billion to corporations for reconstruction services, of which $3.7 billion went to U.S. owned companies, despite specific cost-benefit analysis examples that show local union workers offering the same work for 85% less of the cost.  In another specific example, FEMA awarded $156 million to a private company for delivery of 30 million emergency meals after Maria, but less than 0.2% were ever actually delivered.  Legislation designed to attract foreign investors by tax exemption incentivization also leaves post-hurricane Puerto Rico in a land-rush crisis that functions to effectively push local populations out, again exploiting disaster for profit.  There are a multitude of examples of mangled priorities when it comes to the mishandling of relations between the U.S., the U.S. ‘s influence, and the true will of the Puerto Rican people.  The U.S. profits off disasters in Puerto Rico, and these examples of exploitation are not isolated but rather a themed commonality found in some degree or another across colonized populations.

As we confront the reality of climate change and the likelihood that we may soon all feel the severity of its impact, no matter the population, we must broaden our understanding and awareness of the importance of intersectionality in this fight.  Practice empathetic and generative listening towards marginalized or vulnerable populations; we have to give trust to get it. We must view our climate solutions through a lens that is centered in equity for any hope of sustainable solutions that are necessary.  Like all things mother nature and circle-of-life adjacent, we are all connected as humans and within nature, and our species survival depends on the wide-spread acceptance and embracing of this principle.

Mary Thurston is an experienced Program Associate within social impact sectors and is particularly passionate about the global advancement of women’s rights, equity, and environmental justice. While the views expressed therein are her own, Thurston currently works as Program Associate for the Office of the President at the Science Philanthropy Alliance, a non-profit organization whose mission aims to increase philanthropic support for science with the hope of advancing scientific discovery to benefit society and the planet. While currently based in San Francisco, CA, Thurston grew up predominantly between Puerto Rico and South Florida, which helped form her early love for the environment as a child and into adolescence, attending an environmental science magnet program for high school and as a recipient of the Pine Jog Environmental Fellowship from Florida Atlantic University. Thurston has her B.S. in international affairs with an economics focus from Florida State University and has certifications in Sustainable Business Strategy from Harvard Business School, Fundraising and Development from University of California, Davis, and Giving 2.0: The MOOC from Stanford University. In addition to her volunteer work with Our Climate, Thurston works as volunteer staff for PEAK Grantmaking’s Northern California Chapter, a member-led community of philanthropy professionals dedicated to advancing equitable, effective grantmaking practices. Thurston can be reached at either mary.thurston@gmail.com or mthurston@sciphil.org.
Published On: October 11th, 2022 / Categories: Blog /