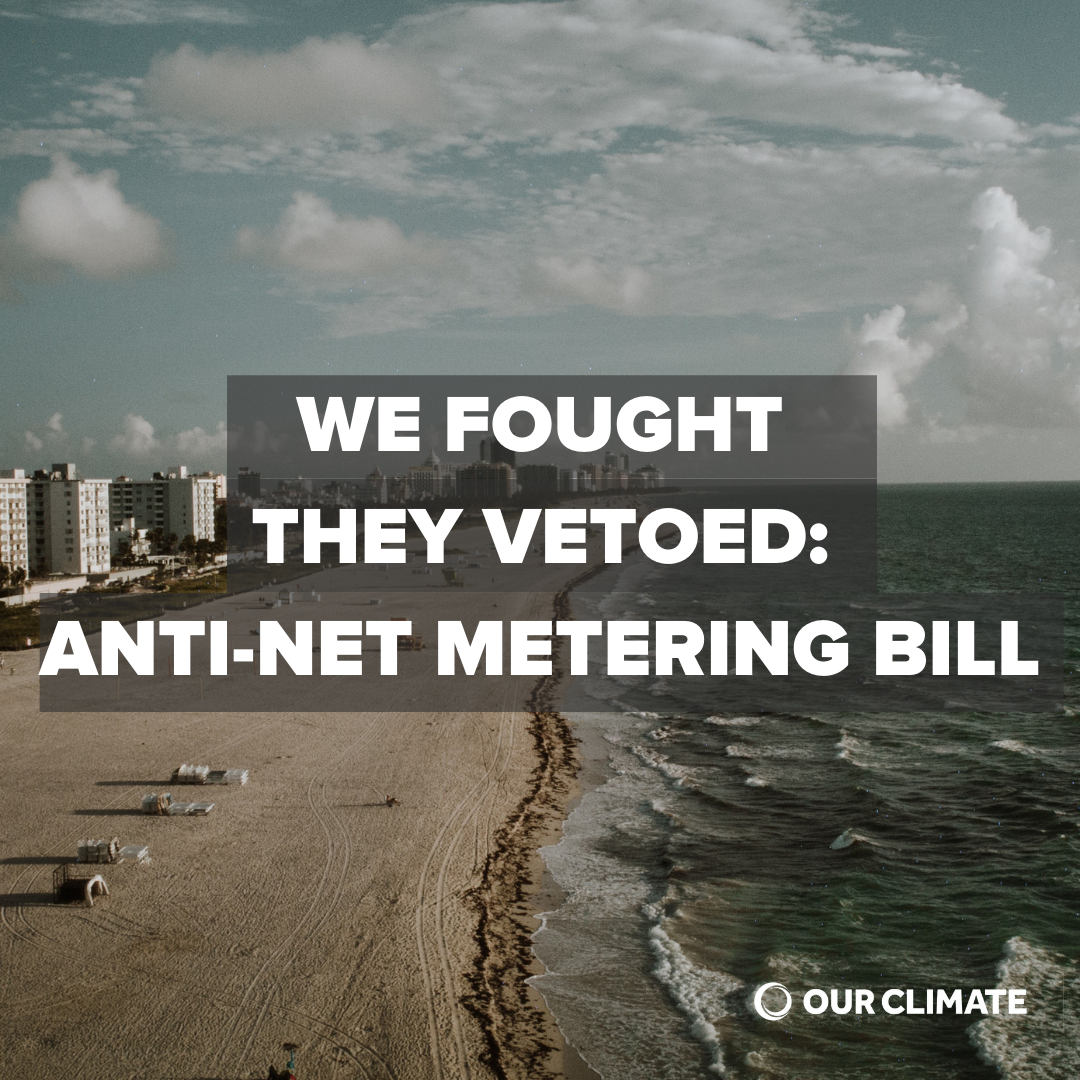 Our Climate Florida is celebrating the veto of the anti-net metering bill here in our state. Our team worked tirelessly to help oppose HB 741/ SB 1024 during the Florida Legislative session this year. The bill sought to jeopardize solar growth by eliminating subsidies and benefits for current solar customers in Florida who want to sell their excess energy back to the grid. With the high costs associated with shifting to solar, this would have made a clean energy switch inaccessible to working class Floridians. This bill also would have harmed the renewable energy industry and would have been an overall setback for the sunshine state. With the potential consequences of this bill on energy justice and renewable energy targets in our state, the bill became the Florida field team’s priority.

I lead a working group where we studied the bill contents and how it would lower utility savings for solar owners. I learned that my own Senator, Jennifer Bradley, was the person to introduce the bill in the senate and that Florida Power & Light (FPL) influenced the creation of the bill. We participated in email blasts to our own representatives and representatives specifically on certain committees. We also created graphics for our Instagram to spread the word for people to contact their representatives. I personally called my representatives and asked them to oppose the bill. However, our efforts did not stop the bill from passing in the Florida legislature.

The field team was not discouraged and turned our focus to Governor Ron DeSantis since the bill was headed to his desk. We drafted an email template for the team to send our personalized emails to Desantis’s office. Along with the emails, team members created a petition and Instagram post to get Desantis to veto the anti-net metering bill. On Wednesday, April 27th, we heard the news that Ron Desantis vetoed the bill. I take pride in believing that the Florida field team’s efforts helped veto this bill. Sometimes it is frustrating when we fight bills like this instead of focusing on climate justice or expanding renewables, but for now, this is a win for solar and energy independence in Florida.

Haley McGehee is a first-generation college student who is from Florida and is a senior at the University of South Florida St. Petersburg. Her major is Sustainability Studies, and her minor is in Environmental Science and Policy. She has always been interested in the environment and nature, but she is also passionate about human rights. She has recently become more involved in the climate movement by joining Our Climate as a Field Representative in 2020 and is now a Fellow for the 2021-2022 year. She is hopeful for the future as we continue to transition to a more sustainable world for all. She enjoys spending time with her dogs, going to the beach, practicing yoga, listening to podcasts, and learning about science, history, and politics.
Published On: May 17th, 2022 / Categories: Blog /