Guilty on All Charges, But Systemic Change is Still Needed 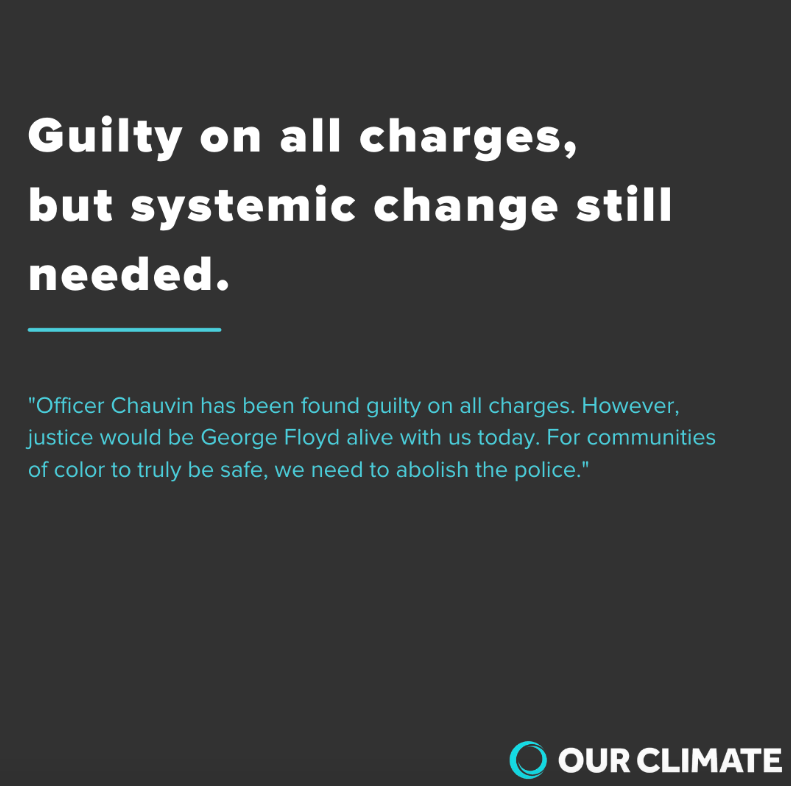 Even though millions witnessed the murder of George Floyd on video, the world just sat on pins and needles as the judge read the verdict of Derek Chauvin. Officer Chauvin has been held accountable to the murder of George Floyd and found guilty of all charges. However, justice would be George Floyd alive with us today. According to the ACLU, this is the first time in Minnesota history, a white police officer has been held accountable for killing a black man.

On April 12th, Daunte Wright was pulled over for a traffic violation: an air freshener on his rearview mirror. Police officer Kim Potter shot and murdered Daunte, claiming she mistook her gun for a taser. Daunte Wright was 20 years old. He was a son, a brother, a boyfriend, and a father. Another family grieves and yet nothing changes.

Police do not keep us safe. In the last 3 weeks as murderer Derek Chauvin sat on trial, police have killed 64 people nationwide, the majority of whom are people of color. That’s an average of 3 people a day whose lives were lost to a broken system, including 13 year old Adam Toledo in Chicago, 32 year old Michael Leon Hughes in Jacksonville, and 17 year old Anthony Thompson Jr. in Knoxville, Tennessee.

This cycle must end. For Black Americans to truly be safe, we must abolish the police and fight for collective liberation. The answer is not, and has never been, violent policing — it’s community care and organizing for the future we dream of.

Police forces in major cities across the US spend billions of dollars each year that could be invested in communities. In communities that lack funding for education, childcare, housing services, public health care, and other basic needs, there always seems to be room in the budget for over policing. Imagine the bright futures we could build if money budgeted for police was invested where it belongs, namely back into our communities.

It’s estimated that police spend only 4% of their time investigating violent crimes. Police do not prevent violence from happening. In the past month alone, there have been 45 reported mass shootings in the United States. Just a few weeks ago, we mourned the lives of 8 people, 6 of whom were Asian-American women killed in a mass shooting at a massage parlor in Woodstock, Georgia. We know that for progress to be made, we must condemn white supremacy and systems of oppression that drive both mass hate crimes and police brutality.

But condemning these acts are not enough. Thoughts and prayers will never be enough. For communities of color to truly be safe, we need to abolish the police and pass strict anti-firearm legislation.

Abolition is not just a dream — it’s possible. We will continue fighting for the future we know is possible.

We stand in solidarity with those in the streets and behind the movement fighting for gun reform and defunding the police. We will continue to support legislation that supports communities of color and is in line with the Movement for Black Lives’ policy platforms.

If you are financially able, we urge you to donate to Daunte Wright’s Memorial Fund and to national and local racial justice organizations, such as The Movement for Black Lives and Good Kids Mad City organizing the powerful marches in Chicago.

Your friends at Our Climate