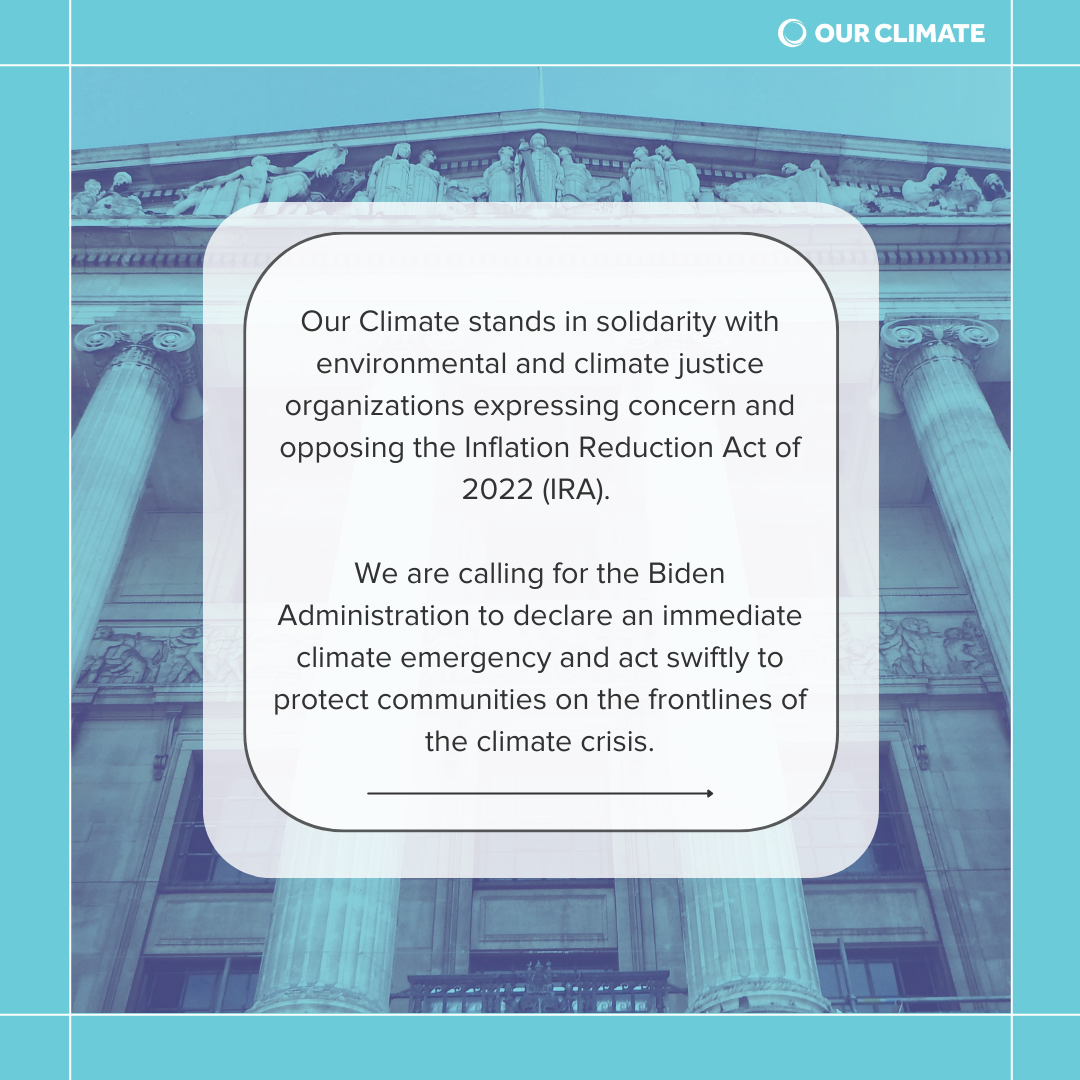 On the surface level, The Inflation Reduction Act of 2022 (IRA) appears to be a victory for the climate justice movement. But beneath the IRA’s attractive top level language is greatly flawed provisions that harm environmental justice communities in the interest of corporations and fossil fuel greed. Our Climate is disappointed by the IRA’s disregard for the needs of frontline climate communities and the lack of input from those most impacted by the climate crisis.

Earlier this year, the Biden administration introduced the Build Back Better Agenda: a historic legislative package that included a proposed $555 billion in climate justice investments which was blocked by West Virginia Senator Joe Manchin (who has made millions from ties in the coal industry). The IRA was an attempt at reviving this legislation with changes to bring Joe Manchin to the table. The result was an unethical series of concessions made behind closed doors that favor the fossil fuel industry and sacrifice the wellbeing of frontline communities for the sake of a “compromise.”

Our Climate stands in solidarity with environmental and climate justice organizations expressing concern and opposing the Inflation Reduction Act of 2022 (IRA). We are calling for the Biden Administration to declare an immediate climate emergency and act swiftly to protect communities on the frontlines of the climate crisis.

Despite being marketed as environmental justice legislation, the IRA fails to address the roots of the climate crisis in systematic oppression. The IRA protects and even expands racist fossil fuel infrastructure by leasing public land for fossil fuel extraction and production. These decisions disproportionately harm BIPOC communities across the United States, including in the Gulf South, Appalachia, and Alaska, where the IRA will expand fossil fuel infrastructure. The IRA also establishes “energy security,” a quid pro quo deal that ties leasing for renewable energy projects with leasing for oil and gas production, and also increases royalties on oil and gas. For more information on how the IRA enables fossil fuel expansion, we recommend this IRA fact sheet by Climate Justice Alliance, Michigan Environmental Justice Coalition, and UPROSE (please credit them for any information shared).

A significant portion of the IRA’s funding would support so called “climate solutions” that have a track record of harming frontline communities, such as funding nuclear energy, hydrogen, and biofuel production. The package’s language includes $3.23 billion in subsidies for carbon capture and storage, which can be done to extend the life of highly polluting coal and other fossil fuel plants. While these technologies do hold potential for reducing greenhouse gas emissions, without input from environmental justice communities they can do more harm than good and detract from truly equitable solutions.

On Friday, Our Climate reshared a social media post from another climate organization, advocating for the Senate to pass the IRA for its climate investments. We apologize for the harm this over-simplification caused. The IRA is not climate justice legislation. Our Climate supports climate justice legislation that falls within our policy principles of being science-based, equitable in content, and equitable in process. The IRA’s lack of transparency and community-involvement make the legislation neither equitable in content nor process. Compromises to pass the IRA happened quickly and without significant input from frontline climate communities, further contributing to the US Government’s troubling track record of silencing BIPOC climate justice leaders in the decision making process.

President Biden, young people appreciate your commitment to climate action, but it is nowhere near enough. We are calling on the Biden administration to declare a climate emergency immediately and act in the interest of communities on the frontlines of the climate crisis. It’s evermore crucial that climate justice organizations remain united to fight fossil fuel racism and protect the needs of frontline climate communities, and not stop fighting until the equitable legislation needed for a thriving world is passed.

We highly recommend the following resources from our partners to learn more:

*Note: we recognize that the IRA also includes legislation in other areas, such as healthcare, but we are only referencing its environmental components as that is our organization’s focus.
Published On: August 9th, 2022 / Categories: Blog, Uncategorized /