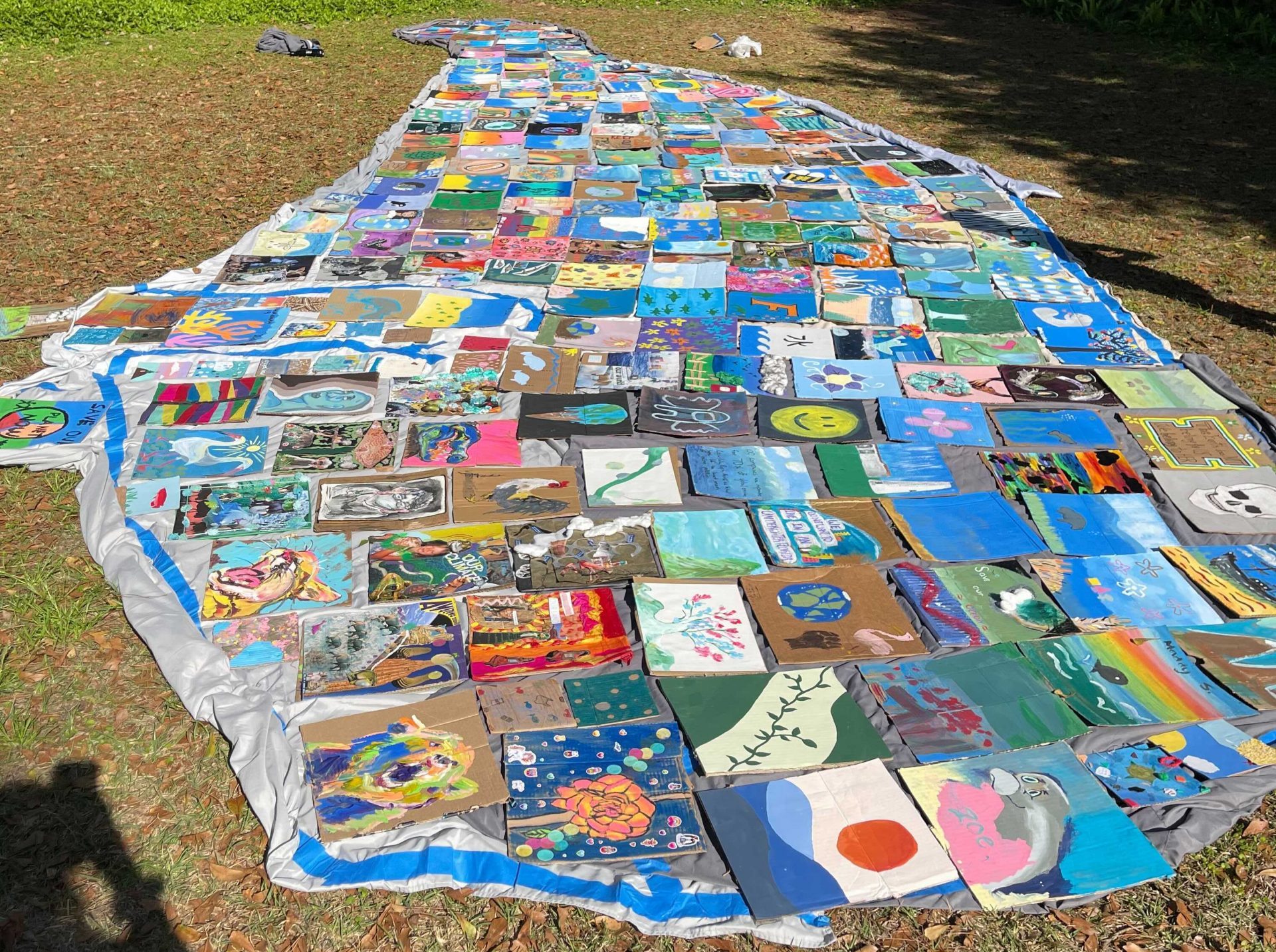 Living in Florida I’ve always known that we’re close to the water, but it didn’t truly hit me how close until I saw abandoned homes that looked like they were part of a scary movie set. These homes had faced severe flooding and there was no going back. Seeing the chipped wood, crumbling walls, and water snakes swimming through these homes, I realized my home could face the same fate if Florida continues to go against climate action.

My name is Esther Perceval, I’m 21 years old, a climate activist, a Florida Fellow at Our Climate, and I’ve lived in Florida all of my life. Miami, FL to be specific, shout out to the 305. I went through all of my schooling here in this state with most of my family members that are living here as well. Florida is all I’ve really known and it’s home. From Miami where I grew up, Orlando where I spent my new adult years figuring things out, and all the way up to Tallahassee where I currently attend Florida A&M University. I’ve lived here all my life and it was only at the age of 19 I was hit with the fact that the land that I call home, I may not not get to call it home forever.

I was in Orlando during my first ever internship at Nehrling Gardens. They wanted to address an issue they had with a lake flooding and taking over a piece of the garden. The cause of flooding was still under debate in the eyes of the law when I had left, but what stayed with me was the damage it had done to the homes in its vicinity. Some of them became inhabitable, others had serious property damage that was costly for these unsuspecting homeowners. Living in Florida, I always saw pictures and read stories of this, but it was an entirely different beast to witness it, the years of turmoil these homeowners had to deal with, the state of these homes, the county members rundown with tasks and not having time to help mitigate the situation. It was a lot to take in. A few days later a guest came to the garden. She was a tourist and wanted to look around. I gave her a pamphlet and we had a bit of small talk. When she asked me where I was from and I responded with Miami, she smiled at me. She said “it’s a lovely city, but isn’t it like underwater?” To be honest I was stunned because I couldn’t answer for certain. When I went home that day I looked it up. It’s only 6.562 feet above sea level. A little less than seven feet, that was it.

I knew Miami wasn’t so far above sea level and our landscape is built differently, but knowing that just about seven feet would keep my cousins from swimming to school was a little scary. After this realization and seeing my experience during my internship I wanted to take climate activism seriously but I didn’t know how. Florida isn’t a state with climate champions for elected officials, and I had so many questions. Why are we harming our wetland ecosystem like the Everglades when it’s important that it stays protected? Why aren’t we paying attention to our clean water supply when we could risk not having it anymore? Why do we pollute our beaches when we know how detrimental that can mean for all of us?

I had so many questions, so many worries, and what felt like so little time. It felt crazy to me that I have elected officials that say they care for the children and the schools but aren’t ensuring clean water, clear skies, and a future here in this state. The sea levels are rising, the rent is rising, but the damage continues to happen. It’s hard living in a state where both local and state elected officials say they only care about jobs and their “common man”, but they vote on policies that will price their constituents out of a home and make sure that in a few years their kids won’t be able to live here either.

In the city where I’m from there’s just seven feet keeping us afloat but it feels like our lifeboat is sinking. It’s exhausting, it’s a conundrum, and it makes me want to scream sometimes. But seven is a lucky number, and I live in a city where the beach is walking distance and the waves can wash away all concern. I live where people come to party with no worries and I only hope we can begin to live without worries.  I haven’t given up on my city, or my state. I have hope in the numerous individuals and organizations working hard to protect the land. I have hope in the indigenous people that are currently protecting the sacredness of this land and are willing to teach us if we’re willing to listen and learn. I believe in the people of this state, and their right to work, play, and live where they were born and raised. I hope that we can protect those precious seven feet that we have, because I don’t want to live in a future where those seven feet no longer exist.

Esther Perceval is a Florida state Our Climate Fellow, and a student at Florida Agricultural Mechanical University (FAMU). Esther is a Chemical Engineer/Material Science major and is passionate about water and waste management. Esther has lived in Florida her entire life and was born in Miami. She attended Valencia College in Orlando, and now attends FAMU in Tallahassee. Having ties althrought Florida, Esther has an interest in linking sustainable relations throughout the state, in order to strengthen the collective, which led to Esther joining Our Climate.
Published On: December 13th, 2022 / Categories: Blog /