Poetry as a Form of Protest 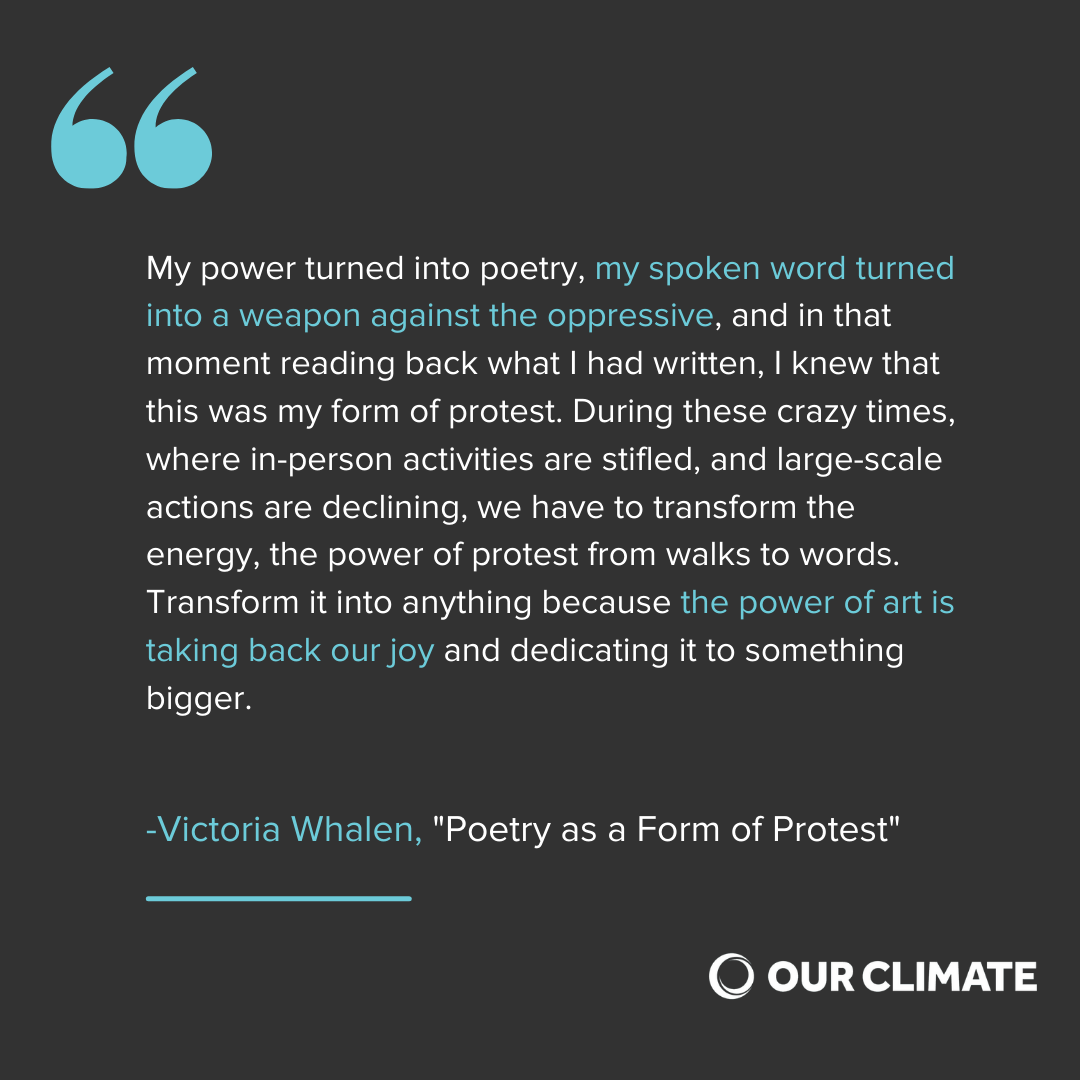 Whenever people hear the word “protest”, more often than not, they associate it with street takeovers, deep rhythmic chantings of justice, and a division between those who are creating the beautiful chaos versus those who were sent to contain it. Modern day media has portrayed protests as violent insurrections– mob mentality taking over. News outlets show looting, fires, damage, and bodies running; yet they fail to show the context of the protests, the reasoning behind the chants.

During the nationwide surge of Black Lives Matter protests during the summer of 2020, I decided to join the chaos. Being a Black woman from Georgia, I know all too well the risks of living in my skin. On the hot day, in the middle of the summer, I stood with thousands of people. I marched through the streets of Atlanta, down Freedom Parkway, across Centennial Park, and ended at the Martin Luther King Jr. memorial. My voice was sore from the chants, my feet and ankles swollen from the 10 mile walk, but my mind and my heart were filled with an endless abyss of hope and power. I had hope for the future as I marched along children who could barely form words. I  unlocked a hidden power in myself to protect what I believe in, power to create a world where people who look like me are given endless possibilities instead of endless suffering.

I considered myself a creative person, a person who constantly appreciates all forms of art: painting, music, theatre, poetry. As soon as I returned home, my mind was filled with words, swarming with alliterations and rhymes, I could see it taking shape before I even realized what I was creating. My power turned into poetry, my spoken word turned into a weapon against the oppressive, and in that moment reading back what I had written, I knew that this was my form of protest. During these crazy times, where in-person activities are stifled, and large-scale actions are declining, we have to transform the energy, the power of protest from walks to words. Transform it into anything because the power of art is taking back our joy and dedicating it to something bigger.

I was recently involved in a string of art actions, also known as Artivism, throughout New York State advocating for climate justice in the form of the Climate and Community Investment Act. I noticed the power return, that feeling of changing the world for the better. I saw countless banners, posters, songs, and spoken words about climate justice and I felt the same way I did after marching in the streets. You see, protest isn’t always about having the most radicalized, in your face actions, but rather the power that your ideas and your support brings to your cause. Protesting can be in the form of anything, from marches to performances, and the reason why it is so successful is because of the passion and the drive that comes from within.

My form of protest is poetry. I want my words to inspire and  my melodies to incite passion. I want to ignite the power within. As the old saying goes, the pen is mightier than the sword.

Excerpt from “B” by Victoria Whalen
I am BROWN

the color of the earth that forms our foundations, the ground underneath our feet that provides us with safety. Long-lasting and supportive

and yet; the ground is swept underneath my feet, where I have to kneel, hands raised up high and have my face shoved down so “I can’t breathe”

“I can’t breathe” as I walk home from school

“I can’t breathe” as I’m playing with friends

Three times more likely to have hospitalizations that led to death

Is just another form of suppression

As their pockets grow bigger through our recessions

What they are doing is criminal, repeat transgressions

Yet we are the ones shot down because of our expressions

Seeing as those who contribute the least, are the ones most burdened by this climate depression

Click here to watch excerpts from Victoria Whalen’s poem “B”.

Victoria Whalen is an Our Climate New York Fellow.
Published On: May 25th, 2021 / Categories: Blog /