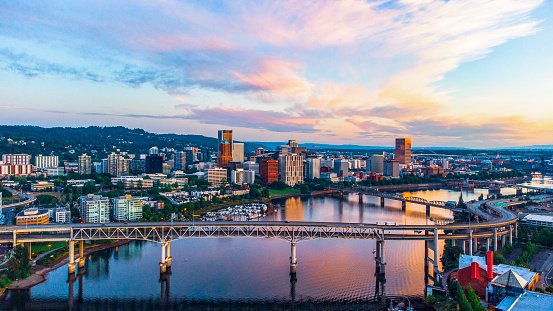 Growing up in Portland, Oregon, I was always told about how our city was so “green” and “sustainable.” I was taught to see the climate crisis as an issue that primarily affected far-away polar bears and icecaps and wildlife—in my mind, it wasn’t something that was impacting us here, or now.

The adults in life led me to believe that though the climate crisis was a problem, it wasn’t something that I needed to be particularly concerned about. I trusted that they would handle it—that our leaders would do what was right and that as a kid, I didn’t have to worry.

I knew that climate change was caused by humans, but as a Portlander, it felt like our city was in some way exempt from that responsibility. We pride ourselves on our better-than-average bike infrastructure and city recycling systems. We pick up trash from the streets, we take short showers, we turn the lights off when we aren’t  home. I was taught that those things were enough.

Now, I can see that I’ve been lied to.

Hiding behind the trendy greenwashing and progressive yard signs, Portland has a horrifying history of environmental racism and climate injustice.

In the 1960’s, the Oregon Department of Transportation constructed the Interstate 5-freeway straight through the center of the historically Black Albina neighborhood in North and Northeast Portland. The freeway, along with the construction of the Portland Moda Center and Legacy Emanuel Hospital forced people out of their homes, displacing thousands of Albina’s original residents. Those who do still live in the neighborhood face the constant threat of diesel pollution from the freeway, which has been linked to serious health conditions such as lung cancer and asthma.

Portland is also home to Zenith Energy, a terminal that transports crude oil, one of the most destructive fossil fuels in existence, from trains to ships on the Willamette River. This system is an accident waiting to happen: when the overdue earthquake hits the Pacific Northwest, massive oil spills from Zenith are inevitable, and will have catastrophic impacts on the surrounding community and on the natural environment. For years, climate activists have made it clear that Zenith has no place in our city, or anywhere. Despite the continued opposition, Zenith’s facilities continue to operate, backed by the very politicians who say that they care about climate justice.

The locations of Zenith and the I-5 freeway are no accident—both cause health and safety risks that disproportionately affect low-income and BIPOC communities. This was an intentional decision made by city planners that continues to fuel environmental and climate injustice in Portland, and must be confronted in order to truly achieve climate justice.

No amount of individual “carbon footprint” reducing action can even come close to mending these historical injustices. What we need is large-scale policy change—bold and sweeping action from our elected and public officials to improve our city for current and future generations.

I am fighting for the Portland that six-year-old me thought we already had, where we can all take care of one another and of our shared home. Where young people like myself don’t have to give up our free time to fight for a livable planet, and where we can trust that the people in power will act boldly to serve their communities.

What if one day, instead of lying to our children about the world they are inheriting, we could tell them stories of how we came together and fixed what was wrong? We could tell them that it was difficult and scary but that we did it anyway, that reckoning with our city’s past was a crucial step in determining the future, and that one day, we can’t wait to see how they carry on the fight for a better Portland and a better world.

Adah Crandall is an Oregon fellow and a senior at  Grant High School in Portland. Her climate advocacy began by opposing the expansion of the Interstate-5 freeway into her middle school, a project that if built would increase emissions and pollution. Since then, she has broadened her focus to fight for transportation and climate justice at a regional and state level, co-founding a Sunrise PDX campaign called Youth Vs ODOT. She is also a leader of Portland Youth Climate Strike, where she works to mobilize her peers for climate action.