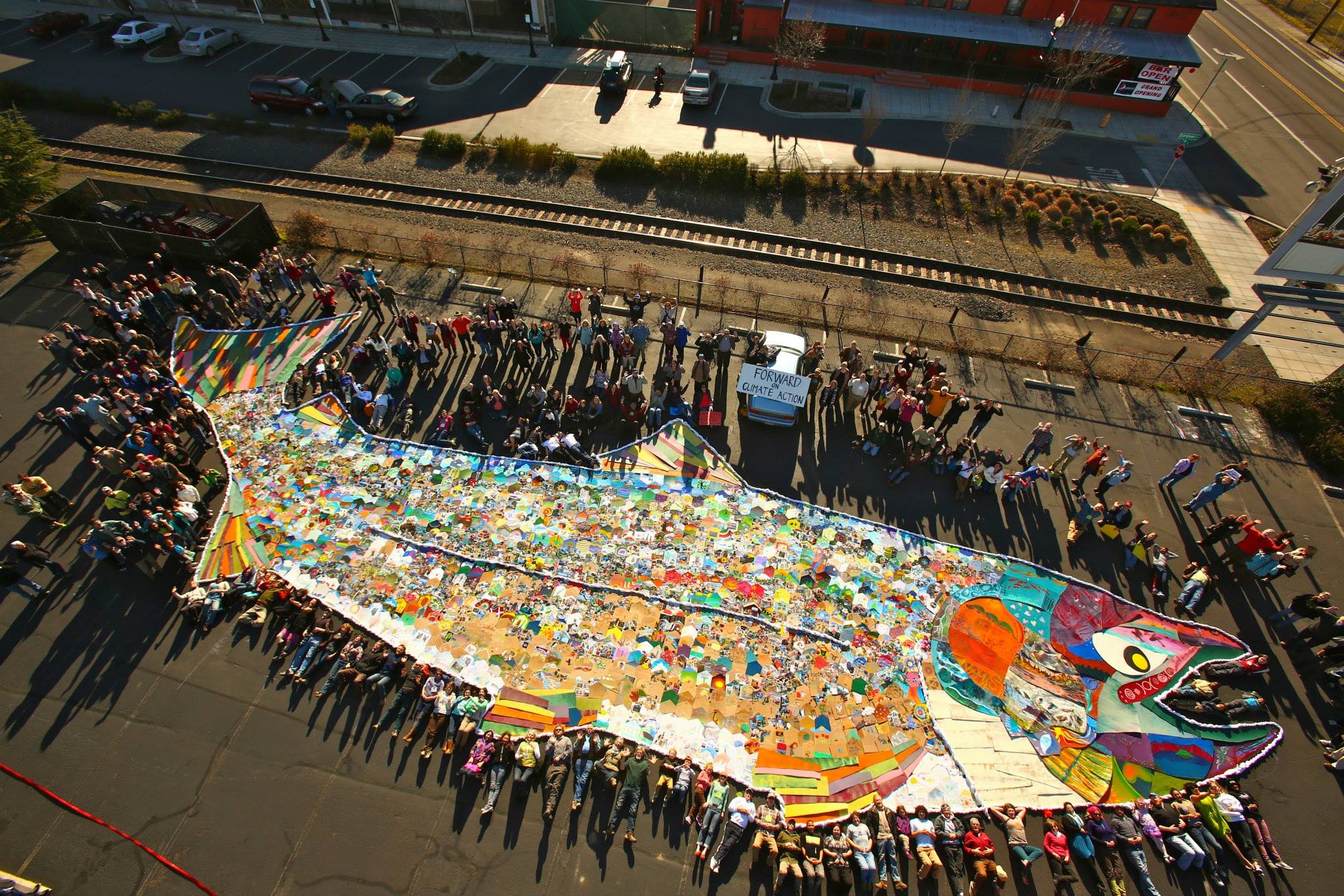 Our Climate has been important to me because low-income and disenfranchised people will be the hardest hit by climate change.  I feel strongly about this because of my 29 years of international and domestic anti-poverty work. I also believe action on climate change will not take place until young people are motivated and actively advocating for that change.

In front of the legislature, they assembled a mosaic of hand-painted cardboard tiles in the shape of a salmon; after the demonstration, we met with legislators and left them with a tile, as a reminder to act on climate change.

Then, we proceeded into the Legislature.  Oregon Climate had introduced a cap and dividend bill and had filled three hearing rooms with young climate advocates from around the state.   Another individual had introduced a cap and invest bill. At the end of the hearing, the Committee Chairperson was clear that neither bill would move forward and that he was frustrated by the lack of a coordinated front on carbon pricing from the conservation community. From that hearing on, action on climate change was a priority of Oregon’s conservation community and the Legislature;  and, Oregon Climate was soon recognized as a national model for involving youth in climate action.

Oregon Climate learned two important lessons from that day that they still adhere to.  The idea of using art to assist in climate advocacy has been a theme of Our Climate since its inception and continues to this day. A recent example is the Valentine’s  Day Cards that were sent to Congressmen, asking them to support the Build Back Better Agenda.  The other lesson was that Oregon Climate would no longer act on its own and instead would collaborate with coalitions of other like-minded climate activists.  Our Climate uses this model wherever we advocate.

After that entertaining and impactful day, I thought I’d tag along with Oregon Climate for the fun of it and to see if I could be of any help to their impressive advocacy efforts.

This ragtag group of Millennials and one retiree dug into articulating a strategy for youth climate action, developing a training curriculum for empowering youth to do climate advocacy, writing criteria for deciding on which issues we would advocate, and integrating youth and OC into the Renew Oregon coalition of organizations and individuals advocating for Oregon to put a price on carbon pollution.  We also developed bi-laws, a mission statement and a strategic plan, and started fundraising.  Somehow, the retiree ended up on the board of directors.

In 2016, the groundbreaking TV documentary series “The Years of Living Dangerously”, recognized Oregon Climate’s good work empowering young people to advocate for climate change.  They granted OC $500,000 over several years and provided technical and digital support to implement a national putapriceonit campaign.  With this boost, it became obvious that our name no longer fit our organization.

So, in 2016, we changed our name to Our Climate and incorporated the Our Climate Education Fund as a 501(c)(3).  From then on, OC operated through two separate organizations.  We also started to focus our advocacy on several states which had strong climate advocacy coalitions.

As we grew in size, scope and sophistication, I had less contact with the youth leaders and still enjoyed being connected to OC.  I especially enjoyed our annual board and staff retreats, before the pandemic put a hold on those gatherings.  At the awards ceremony at the conclusion of the 2018 retreat, I was proud to receive the “Cleanliness is Next to Godliness” award, as I had washed more dishes than any other board member.  I made what I consider one of my most important contributions to OC, at our 2019 retreat, when I convinced the board and staff to write into our annual plan the creation of an OC Alumni Network.  By then we had trained over 3,000 youth leaders, and saw the Network as a way to connect alums across the country to learn from one another, share opportunities and resources, to work on various OC projects and to support our leaders to advocate for climate and environmental justice throughout their careers.  I believe the Network will become a big part of OC’s legacy.

For years, OC had been trying, with limited success, to develop a stronger climate justice focus and incorporate BIPOC leaders into our board, staff, Fellows and ways of operating.  OC board and staff participated in a Diversity, Equity, Inclusion and Justice  training.  We completed a process of  institutionalizing DEIJ in our policies and procedures, revised our Fellowship program to make it more accessible to low-income people and increased our recruitment and advocacy outreach into the BIPOC community.

We achieved a huge step forward with our DEIJ efforts, in 2020, when we recruited Jasmine Sanders, as our new Executive Director.  Jasmine has a strong background in climate and not for profit management, has promoted our climate justice work, increased our fundraising, expanded our work to the international level, and helped to recruit a new highly-skilled board with a wide variety of backgrounds, and numerous fundraising and networking contacts.

I left the board in early 2022 believing that OC has matured into a nationally important youth climate advocacy organization and is well positioned to continue empowering young people to advocate for science-based, equitable and intersectional climate justice policies that build a thriving world.

It has been great fun and very gratifying to tag along on OC’s journey. Thank you for the opportunity.  I hope that I was able to contribute in some small amount to OC’s past and future successes.  I’ll miss working closely with you all and look forward to hearing good things about you.

By Gordy Molitor. Gordy was a member of Our Climate’s Board of Directors for 7 years before rolling off in 2022.
Published On: March 3rd, 2022 / Categories: Blog /